Up in Smoke: Slavery Researchers Decry Burning of Historical Records

I am fighting back tears and my stomach is in knots. Most people probably wouldn’t have a physical reaction like this upon learning that 100 boxes of historical documents in Franklin County, North Carolina dating from 1840 were destroyed, but I do.  They were incinerated at an Animal Pound no less.  Reportedly, it took the whole weekend and a lot of fuel to burn these records.  It also took more than $7,000 taxpayer dollars. I have this pained reaction because historical records are a passion of mine.  They helped me find many of my enslaved ancestors.  As a sort of obsessed family historian, for years I have driven far distances to research in ancestral towns and spent days in the backrooms and basements of courthouses.  I’ve combed through fragile 200-year old documents.  I even initiated a volunteer project in western Kentucky to try and unfold and better preserve records still folded into small bundles, like these burned in Franklin County.  Folds in old documents often wears away the fibers in the paper.

I know what it feels like to gingerly hold and smell these age old relics that transport me in time.  Deemed as property during slavery, court records especially are a rare window into the humanity of people held in bondage.  Through these records we can learn about how they were bought and sold, the composition and separation of families, and how black people during slavery – both free and enslaved – appealed to the courts for redress, sometimes winning.

As a descendant of enslaved ancestors, this deep desire to know more drove me to back to graduate school later in life, at 55.  As part of my graduate work, I spent 5 months at the National Archives in 2013 interviewing state archivists and county clerks about historical records, specifically loose bundled material like that above.  I wrote an article about my research. http://www.nagara.org/associations/5924/files/VOL29_No2_Final_0604_2013.pdf

I first learned about the travesty in North Carolina from my good friend and linked descendant, Professor Ann Neel.  For more than 20 years Ann and I have talked most days about all things genealogical and about current events.  We discuss and debate, agree and disagree. We live in the present and try to learn from the past.  We work on important projects together, within and outside of Coming to the Table, which we hope will raise consciousness about issues related to “race”.  This is what it means to us to be linked descendants.  Ann heard about the situation in North Carolina and mentioned it to me.  I have since spent time trying to understand exactly what went wrong.  And I do believe that, despite environmental damage to some of the records and the possibility that some of them were said to be kept private, it was wrong to destroy them all, especially when arrangements had been made by the local Heritage Society to have the molded records cleaned.  Every old record does not have “permanent historical value,” I understand, but many do – and the Heritage Society had determined that there was much to be preserved in this newly discovered time capsule basement backroom.  Even so, a whole room with items like these and like the letters above are now gone, literally up in smoke. 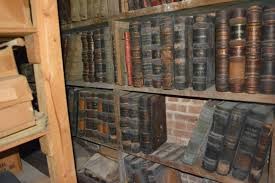 Carried away in a surprise move with no advance notice, after business hours.

If this can happen in any county, it can happen yours.  If you care about historical records, please comment. Or better yet, make your sentiments known to the folks in North Carolina.

Facebook: https://www.facebook.com/media/set/?set=a.556194484469013.1073741838.366834443405019&type=3“As of Sunday afternoon (December 8, 2013), the incinerator at the county’s animal shelter was still burning as workers, methodically and deliberately, inserted each box, bundle and book, adding hundreds to the bill in fuel to consume the packed boxes and large leather volumes. As the firestorm of dismay continues, complaints to the county management pour in and lovers of history everywhere shake their heads in shock, the fires burn on and our concerns go unheeded.”

Everyone has a version of the story.  It’s important to read all sides.  I won’t recount them here.  You can read here http://stumblingintheshadowsofgiants.wordpress.com/tag/diane-taylor-torrent/

My point in writing this post is to express my deep concern that authorities hastily destroyed historical records before they could be properly and completely assessed for their research and reference value by the Heritage Society — especially since those same governmental entities had declared the records to be useless.  I’m working on another historical project where I’ve been told by a government agency that important records were destroyed because they had “no archival value.”  This is a lot of power.  It must not go unchecked.

According to a blog post on this subject, [1] the North Carolina General Assembly enacted legislation stating that

The instructive part of that passage is that records ought not be destroyed if they have research or reference value.  The Heritage Society had already provided evidence of historical value and more would likely have been uncovered if the process had been allowed to continue.  Instead, the assessment was abruptly halted and the records, all the records, burned.  This case presented extenuating circumstances and should have been handled with flexibility.  The basement room had been hidden for decades.  Members of the community, led by Diane Taylor Torrent and the Heritage Society, had a deep interest in saving the records and readily assumed the burden of rallying the town for space and supplies to organize and log the material.

Some great historians, genealogists, and concerned citizens in Franklin County, with Heritage Society at the center, are demanding answers of those in power.  No doubt at least some of those records informed research on slavery and slaveholding.  Franklin was a big slaveholding county.  According to Mr. Tom Blake who transcribed the 1860 U.S. Census Slave Schedules for Franklin County, North Carolina (NARA microfilm series M653, Roll 922) in 2003, the county was home to 104 slaveholders who held 20 or more slaves, accounting for 4,162 slaves and 501 slaveholders who held the balance for a total of 7,076 enslaved persons.[1]  Surely some of the destroyed records, the loose and still folded documents in particular, would have shed light on this dark period of Franklin County’s history.  In similar bundles in other states I have found crucial material relating to my enslaved ancestors by going through each piece of un-indexed paper in loose material like this.

How is it that masked individuals can be hired to haul out county history without public notice in the middle of an assessment of the records by the community and burn them? Officials must have been expecting pubic protest.  As linked descendants, where is our place in these discussions?

[1] § 121-5.  Public records and archives can be viewed at http://blog.eogn.com/eastmans_online_genealogy/2013/12/franklin-county-nc-destroys-100-year-old-records.html

Since this post was written a Franklin County Board of Commissioners meeting was held and many of the people in attendance felt their questions went unanswered.  A recent article in a North Carolina newspaper article termed the situation “Burngate.”

Read more and see video clips of Franklin County Board of Commissioners meeting at Into the Light http://justthinking130.blogspot.com/2014/01/update-on-destroyed-records-in-franklin.html

15 comments on “Up in Smoke: Slavery Researchers Decry Burning of Historical Records”