Thank you for the admonition, Prinny.
(See her post, You Discovered a Slave Owner in Your Family Tree? here.)

Granted, it was at Race Talks, an ongoing community forum in Portland, Oregon, where I found myself seated beside Des Moines Jazz Hall of Fame inductee, guitarist Frank Tribble. It was an environment in which we could be expected to be aboveboard about contemporary racial issues. But I spend a lot of time in family history research … and ‘Tribble’ is an unusual name. I could hardly contain myself. I asked where his people hailed from, and when he replied Cincinnati, I rushed past this element of shared identity (the Queen City is also my birthplace) to ask whether Frank had kin in Madison County, Kentucky.

I could tell by the tilt of his head, when he allowed as he had family roots there, that I had gained Frank’s interest.

I did not, however, pause to scrutinize his subsequent body language: it may have communicated that I was too swiftly moving to unsought intimacy. Frank’s eyes grew wide when I asked whether ‘Andrew’ was a common forename in his family. “I have an uncle, and I think a great-grandfather by that name,” was his reply.

I’m partially the product of a very successful re-union with linked descendant and BitterSweet member Ardis Ligon. Her full-on acceptance of our joint heritage – which I did not anticipate, as it followed our realization that an ancestor of mine (or his descendant) likely bred with her enslaved ancestor – had lulled me into a pre-disposition that things would be cool between Frank and me. Ardis had invited me into her family, to my own great reward. I found myself liking Frank from the outset … as if, in meeting the talented performer and longtime civil rights advocate, I’d introduced myself to a distant cousin.

Rev. Andrew Tribble (1741-1822, a 4x gr-grandfather) occupies his place in American history. Personally, I enjoy accounts that this colonial/revolutionary-era, Baptist preacher may have helped radicalize Thomas Jefferson. After meeting Frank, I began researching black Tribbles in Madison County. To my great surprise, I discovered an African American Andrew Tribble out of Richmond, Kentucky also has historical merit. I got a blog post at Hard Honesty out of life choices made by Andrew Tribble (1879-1935). It arose from a kindred sense of admiration.

I did not mention Frank in the post. But I’ll admit a shadow of disappointment lay over the fact that my new friend did not respond to an email, alerting him to what I thought was a well-researched analysis of Andy Tribble’s unconventional life. I worried that references to ‘pickaninnies’ and ‘darktown’ troubled him; that I’d not done enough to offset the Jim Crow era with insight from Black intelligentsia arising in the Jazz Age.

I’m not particularly astute, at understanding how cultural taboos will influence cross-racial relationships. I understand many of my fellows are far less conversant with the soul-destroying features of slavery … practices I’m now quite familiar with, at both policy and deeply personal, psychological levels. I’m apt to fail in social settings, being far too casual in referring to gruesome, slave-era practices as if they were common knowledge. Even in analysis of historical racism in popular culture, some topics are functionally taboo in ‘polite company.’

It can be a conversational minefield.

I find but a small subset of contemporary society willing to raise consciousness around racial injustice. It’s tough enough to get friends in the dominant culture to admit to or understand American racism in its current practice: few actually seek out its historical roots in slavery. Even among well-meaning whites, few want to consider any likelihood that they retain a share of the massive wealth generated by slave labor, passed generation-to-generation as privilege … in the form of college tuition or down payments on homes. Few are willing to countenance threads tying today’s oppressive, anti-‘gang’ policing to slave patrollers of old.

Dr. Joy DeGruy, in her ground-breaking study depicting a Post Traumatic Slave Syndrome, has sensitized me to dysfunctional attitudes and maladaptive behaviors that may afflict my black brothers and sisters. I aspire not to add to their unequal share of burdens. I too must not assume every African American with whom I suspect a family connection will be glad of this knowledge.

Sadly, Frank Tribble and I were unable to complete our understanding. He surprised me in a sudden return to Iowa. I did not know then of his terminal diagnosis: Frank had gone to spend his last days with his closest kin. 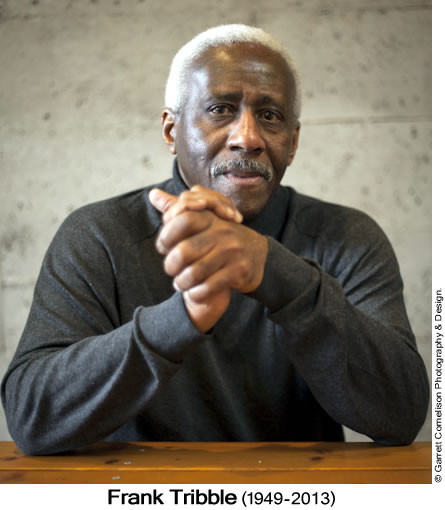 In service to protection of Native American land rights and religious expression since 1983, I currently seek to implant racial justice in our nation's criminal justice system. Historian, working author. View all posts by Roger David Hardesty