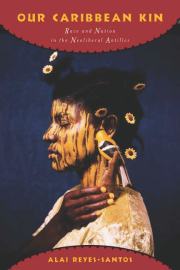 I sit here in Harlem, New York, meditating on the healing potential of bringing “linked descendants” together at the table. I literally share a table right now, with people of all sorts of backgrounds. Some descended from enslaved peoples; others are descendants of enslavers; and most of us are descendants of both. What an ideal place to respond to BitterSweet’s invitation, to share some thoughts about kinship and solidarity based on my recently published book, Our Caribbean Kin: Race and Nation in the Neoliberal Antilles.

As I see photos of the project “Coming to the Table,” I cannot help but wonder what would it mean to come to the table as “linked descendants” in the Caribbean, or within U.S. Caribbean communities. As a Puerto Rican woman based in Oregon, and a scholar of race in the Spanish-speaking Caribbean, I am familiar with our usual historical narratives of cultural whitening. These ideas began in the 19th century, as newly independent nations emerged in Latin America. For many, independence from Spain was not necessarily accompanied by emancipation from slavery, or affirmation of Afro-descendant and indigenous peoples’ humanity and political rights.

According to Latin American elites, through mestizaje –  or racial mixture  – indigenous, mulatto and black populations would be culturally whitened in order to become “proper” political subjects. These national elites, like their colonial predecessors, sought to eliminate Afro- and indigenous histories, cultures, and political claims to economic reparations and land. The citizen came to be imagined by them as racially mixed, but culturally Spanish or European. Within those elitist narratives, racism is not considered a Latin American reality … because the prevailing notion became “we are all mixed, mestizos.” Somehow, we are all imagined as already sitting together at the same table, with the same rights and access to education, work, health care, water and other resources.

But other narratives challenge those claims.

When the Puerto Rican hip hop duo Calle 13 performed their song “Latinoamérica” at the 2012 Latin Grammy Awards, they tapped into a visceral memory of anti-racist movements in the Americas. The music video (at the link) became an immediate hit. Thousands of people throughout the Caribbean, North, Central and South America, listened to the musicians’ call for continental solidarity; and shared it widely through social networks. Their critique, of the privatization of natural resources and land expropriation from indigenous and Afro-descendant people, was a contemporary reverberation of historical anti-slavery struggles. Clearly, their messaging indicates the legacies of colonialism and slavery are not over. Calle 13 demands we see each other as kin, and actively undo colonial legacies of racial and economic violence.

These hip hop demands, for inter-racial and inter-ethnic kinship, question racist assumptions. They do so in a cultural framework characterized by 19th-century whitening narratives. Through hip hop, contemporary emancipation activists also recall anti-slavery struggles of another century. The abolition of slavery in Cuba and Puerto Rico was accomplished in the 1870s. Anti-slavery advocates on both islands faced social ostracism, exile and death. They fostered inter-racial kinship, as an attempt to mobilize all sectors of these Caribbean societies, but also to represent their own inter-racial backgrounds.

For instance, Puerto Rican Ramón Emeterio Betances y Alacán  (left) – of French, Spanish and African descent – was the descendant of enslaved peoples and enslavers. Throughout his life, he became one of the most robust voices against slavery and dehumanizing treatment of Afro-descendant peoples … as well as Chinese indentured workers … in the Atlantic world. He died in exile, in France, in 1898. While in exile, he did not stop his revolutionary activities for the independence of the Antilles and the political enfranchisement of people of color.

In a letter to his sister, Demetria Betances Alacán, on March 30, 1879, Betances asserts that no one in their family had ever denied their mulatez; he claims “we are black (prietuzcos) and do not deny it.”  (Pg. 39, 2015.) In her letter to Betances, Demetria had complained about a former friend, who had distanced herself because Demetria was one of the darkest members of the Betances family. Betances explains that the family had had to legally whiten themselves to override Spanish regulations that limited interracial marriages: “to fall within the parameters established by Spanish law, they had to acquire documents that proved their blood’s whiteness (blancura de sangre) and prove, to everyone’s eyes, that we, black people, were as white as … an Irishman, if necessary.” (Pg. 39, 2015.) In other matters, the Betances family continued to affirm their black ancestry.

Betances extends the mulataje that constitutes his immediate family, to his description of Puerto Rican demographics. In another letter, he asserts that Puerto Rico is demographically constituted by the raza de color (colored race). (Pg. 77, 2001.)  He refuses to discursively whiten them through an affirmation of Spain’s racial and cultural legacy in Puerto Rico.  And he advocates the need to build cross-racial alliances to obtain the abolition of slavery and independence for Cuba and Puerto Rico. White leaders of the 19th-century movement to end Spanish colonial rule in Cuba were afraid of any potential rise to power of black leaders … like that of Antonio Maceo. Betances, on the other hand, claims his family’s mixed, mulatto, ancestry; and, from that enunciation, imagines “las Antillas para los Antillanos” (the Antilles for Antilleans) … not for Europe.

A mural painted by Transnational Black Feminist Retreat participants, in the Dominican Republic in March 2013, speaks to the need to engage these historical legacies of slavery and emancipatory inter-racial and inter-ethnic political kinship. These black femi­nists; from the United States, Haiti, Puerto Rico, Jamaica, Cuba, and the Dominican Republic; were deeply invested in creating political networks that transcended their national borders. The organization that provided housing for the retreat, La Confederación Nacional de Mujeres Campesinas (CONAMUCA), works with rural women who advocate for land rights and the right to produce their own food in the Dominican Republic, Haiti, Puerto Rico, and many other countries. 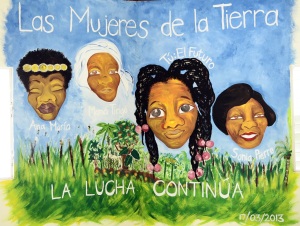 Las Mujeres de la Tierra / The Women of the Earth

After consulting CONAMUCA, the retreat’s participants painted a mural (right) depicting three women whose legacy they had felt through­out their week together: Ana María, a leader of an 18th-century insurrection against Spanish colonials; Sonia Pierre, founder of the modern Haitian Dominican Women’s Movement; and Mamá Tingó, a Dominican activist leader who in 1974 was assassinated while defending communal lands. For the retreat’s participants, Ana María, Pierre, and Tingó are predeces­sors who inspire Dominican struggles for land rights and food sover­eignty … against racism, sexism, and colonialism.  In a supportive environment not unlike Coming to the Table, retreat participants advanced Haitian migrants’ human rights, their children’s right to Dominican nationality, as well as their own attempts to address racial, economic, and gender violence in other places.

Invoking these legacies of resistance, the mural synthesizes desire for transcolonial kinship among the Afro-descendant feminists at the retreat, including gay-identified men and lesbian, straight, and queer-identified women. It was not an attempt to erase the class, national, and ethnic differences articulated among retreat participants (and those who graciously hosted them). Those differ­ences were hard to forget, as people shared their experiences with one another.

We all came to the table in Santo Domingo. As inheritors of the European invasion of the Americas, of slavery and emancipation struggles; as inheritors of distinct U.S. and Caribbean notions of race, gender, and racial mixture. At that table, we faced our differences in endless conversations about the meaning of blackness in the Dominican Republic and the United States, and the perception that Dominicans do not accept their blackness just because it is not manifested in terms legible to North American interlocutors. And we had to recognize that U.S.-based definitions of feminism do not necessarily represent how women organize politically in the Caribbean. Those conversations were not always easy: they were at times painful. They revealed so much about what we incorrectly assumed about one another, especially because U.S. notions of race and feminism tend to ignore Latin American and Caribbean racial and feminist histories.

We find ourselves in the midst of a growing and inspiring #BlackLivesMatter movement that has gained international recognition. I hope we can continue to inspire the kind of transcolonial kinship modeled by our predecessors; and that we honor the healing work we must do together, to truly address the disruptive and dehumanizing legacies of an Eurocentric worldview. These legacies breed division and inequality, when we require solidarity and justice.

This version of Latinoamérica offers English translation in subtitles. (6 mins)

Dr. Reyes-Santos is Associate Professor in the Department of Ethnic Studies at the University of Oregon. Interdisciplinary research includes Haitian-Dominican and Dominican-Puerto Rican relations, and racial and gender dynamics in U. S. and Caribbean diasporas. Her latest book, Our Caribbean Kin: Race and Nation in the Neoliberal Antilles, was released by Rutgers University Press in 2015. An award-winning educator, and internationally recognized scholar, she directs the Eugene-based firm, Community Consulting; offering equity and inclusion training, materials development, coaching and facilitation to institutions and organizations.

12 comments on “Our Caribbean Kin”